MILLTEK SPORT ARE BACK BEHIND THE WHEEL AND HEADED TO GERMANY

We are heading to Germany later this week in preparation for the 2nd round of the VLN Endurance Championship, where Milltek Sport MD Steve Pound, will be managing the team. Professional drivers; Chris Chadwick and Dominic Tranchet will be behind the wheel of the Milltek Sport Toyota GT-86.

“It has been a year since I have been in the team management position but with the growth of Milltek Sport GmbH at the Nürburgring and our involvement in Motorsport growing, it is important for us to get back into the mindset that many of our customers face week to week. This way we have a complete understanding of what they are trying to achieve and can truly put ourselves in their shoes in order to best deliver products that truly suit their requirements.” - Steve Pound, Milltek Sport Race Team Manager / Managing Director.

VLN is comprised of nine races between March and October 2019. The racing championship sees drivers from around the globe competing in a series of eight 4 hour races and one 6 hour, a sneak preview of what is to come at the highly anticipated N24. 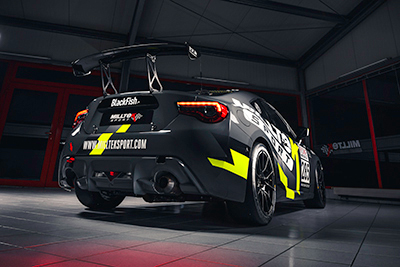 Chris Chadwick has been racing competitively since 2009, he has achieved podium finishes in various daring professional events such as Citroen C1 Endurance and GT4 European Series. He has extensive knowledge and driving experience at the Nürburgring where he and Dominic are setting their sights on claiming a spot on the podium. He is based just an hour away from the Nürburgring and has taken part in various events there, driving the likes of BMW325i, BMW Z4, VW Golf GTI, and BMW M3, with multiple podium finishes.

Dominic first began racing at the Nürburgring in 2016 after many years of track days and training events, driving cars such as the Porsche 964RS, Audi RS2 and VW Golf GTi Clubsport S. To date, he has raced in RCN and VLN events and has driven a diverse range of vehicles inclusive of BMW 325i, Toyota GT86 and Porsche Cayman’s, with a number of podium finishes throughout. These racing events have enabled Dominic to obtain his VLN A racing permit, as a result he will also be racing with Milltek Sport at the N24 later this year.

Tranchets racing partnership started with Milltek Sport at the start of the 2018 season, when he first raced in our class winning Toyota GT86 cup car, and he has been a part of the car’s extensive development over the last 12 months since the end of the TMG GT86, progressing into the highly competitive SP3 class with the car.

With VLN 2 around the corner, we are busy preparing the Milltek Sport Toyota GT86 and getting the team ready for the tough 4 hours ahead of us. With the development of the vehicle planned out and prepped, this is the beginning of what is to come at this years N24 where we will be competing to improve upon the monumental achievement from last year, finished second within class.
← Previous Next →
Categories
Recent Posts
Archive
March 2020
February 2020
January 2020
November 2019
September 2019
August 2019
July 2019
June 2019
April 2019
Tags
motorsport british touring cars performance exhaust system custom exhaust system vln endurance exhibitions usa paddock equipment active sound control milltek innovation audi rs6
Copyright © 2019-present Milltek Sport Ltd, Inc. All rights reserved.