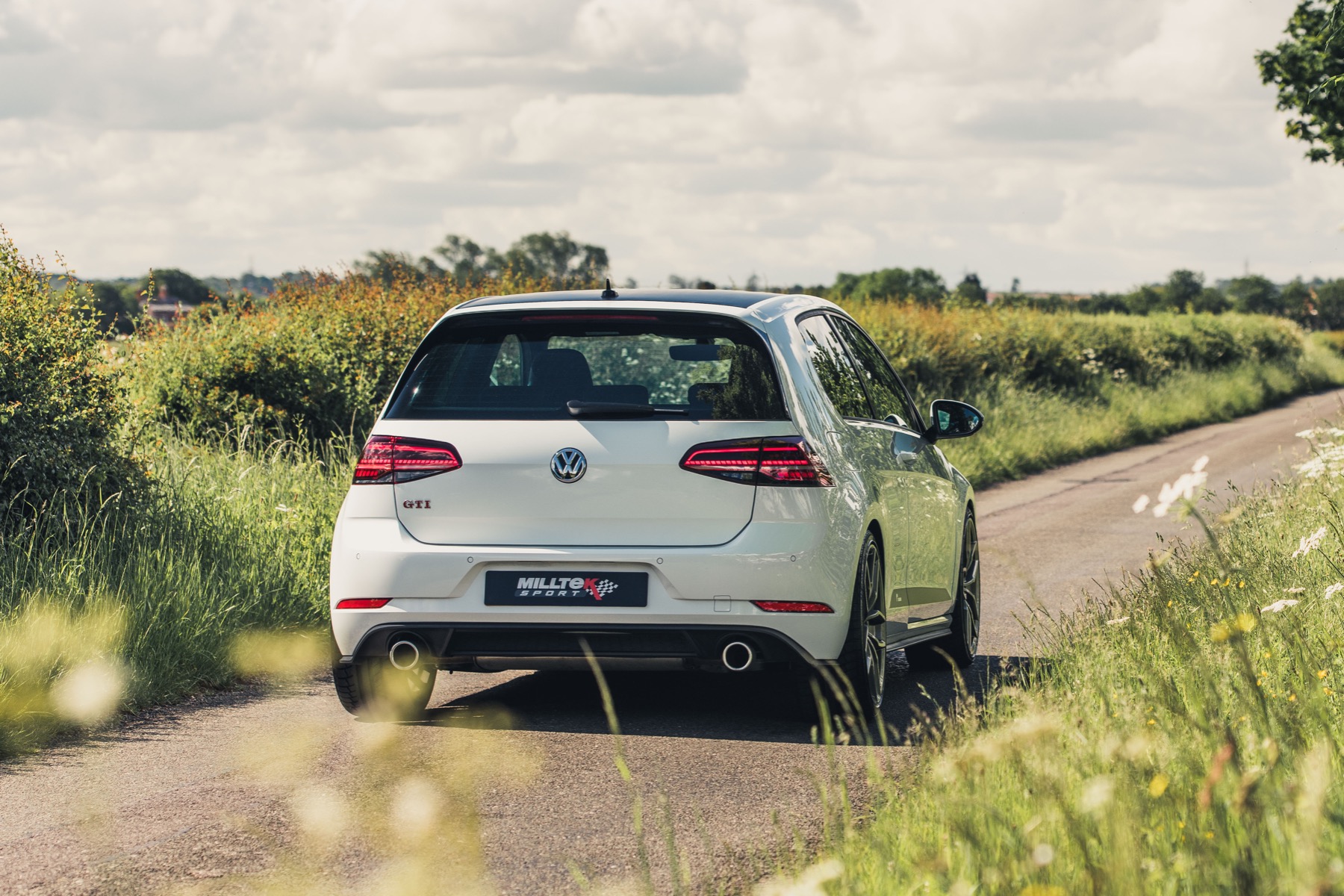 Madonna, Hungry Hungry Hippos, The Sony Walkman, The Golf GTi ‘Campaign’ and Milltek Sport; A lot of iconic things came out of the 80’s!

Where Madonna is past her best, board games have been replaced with mobile games and an entire record collection can fit into your pocket, the Golf is still as popular as ever and Milltek Sport continues to make them sound as good as possible!

Joking aside, the newest iteration of the Golf, the Mk 8, is starting to arrive in the UK, with customers eagerly anticipating the arrival of the GTi later in the year. With that eagerness being shared by us here in Derby, we’re taking a nostalgic look back over the archives at the Golfs that have passed through the garage doors of Milltek Sport as we wait to get our hands on one.

The previous generation, the MK7, has been around in various iterations for several years. It has endured one of the biggest periods of change in the company's history, with emerging technologies, scandals and an increase in competition to deal with. Despite all this adversity, the Mk7 has played a key role in this transition with many revisions being added to the facelift, commonly referred to as the Mk 7.5 in 2017. This generation has become a familiar sight at Milltek Sport with multiple versions joining the fleet, heading to track days, races and events. The 7 is no stranger to our R&D facility too, more variants of the Mk7 have systems developed for them than any prior generation.

Earlier in the Mk 7’s lifecycle, we began a project making a Golf R track ready. In the end, the R produced 500 bhp and was lucky enough to have been driven by the likes of Sir Chris Hoy and Jon-Allan Butterworth during Mission Motorsport’s Race for Recovery. This car stayed with us for double the length of time of any other cars on the fleet, 4 years were put into this blue bullet, it truly made its mark on the company and all those lucky enough to have seen it in action. 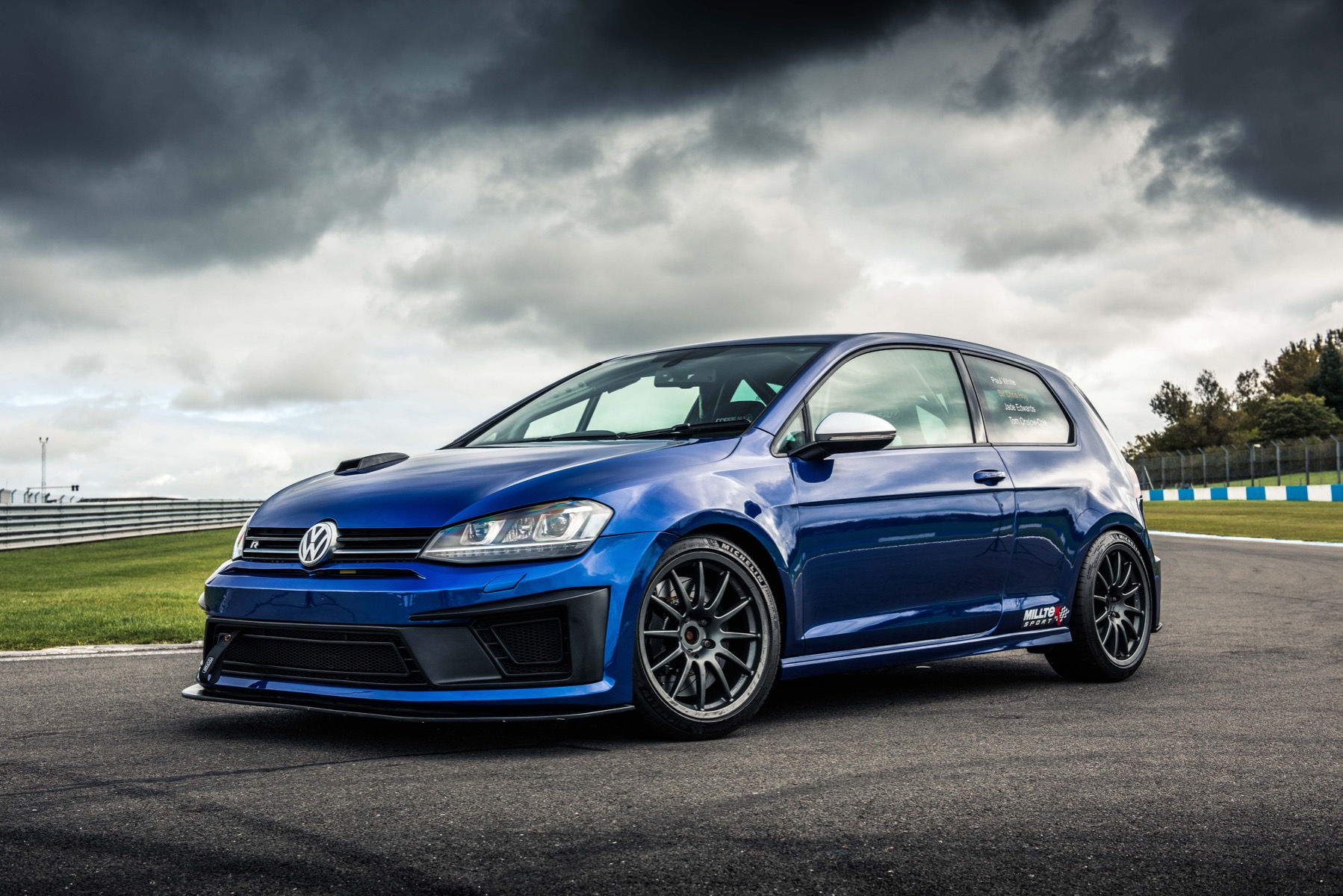 After the facelift of the Mk 7 we took it to the next level with the GTi TCR, the same model raced in the TCR series. In 2018, the year of Milltek Sport’s 30th anniversary we took the Nordschleife, competing in the VLN series with the golf in a commemorative anniversary livery. This version of the Mk 7 took the engine from the Golf R, strapping it and it’s driver into a lightweight chassis that was 40cm wider than the base version. This combination made for a sharp and nimble touring car that was competitive across the various series it competed in. 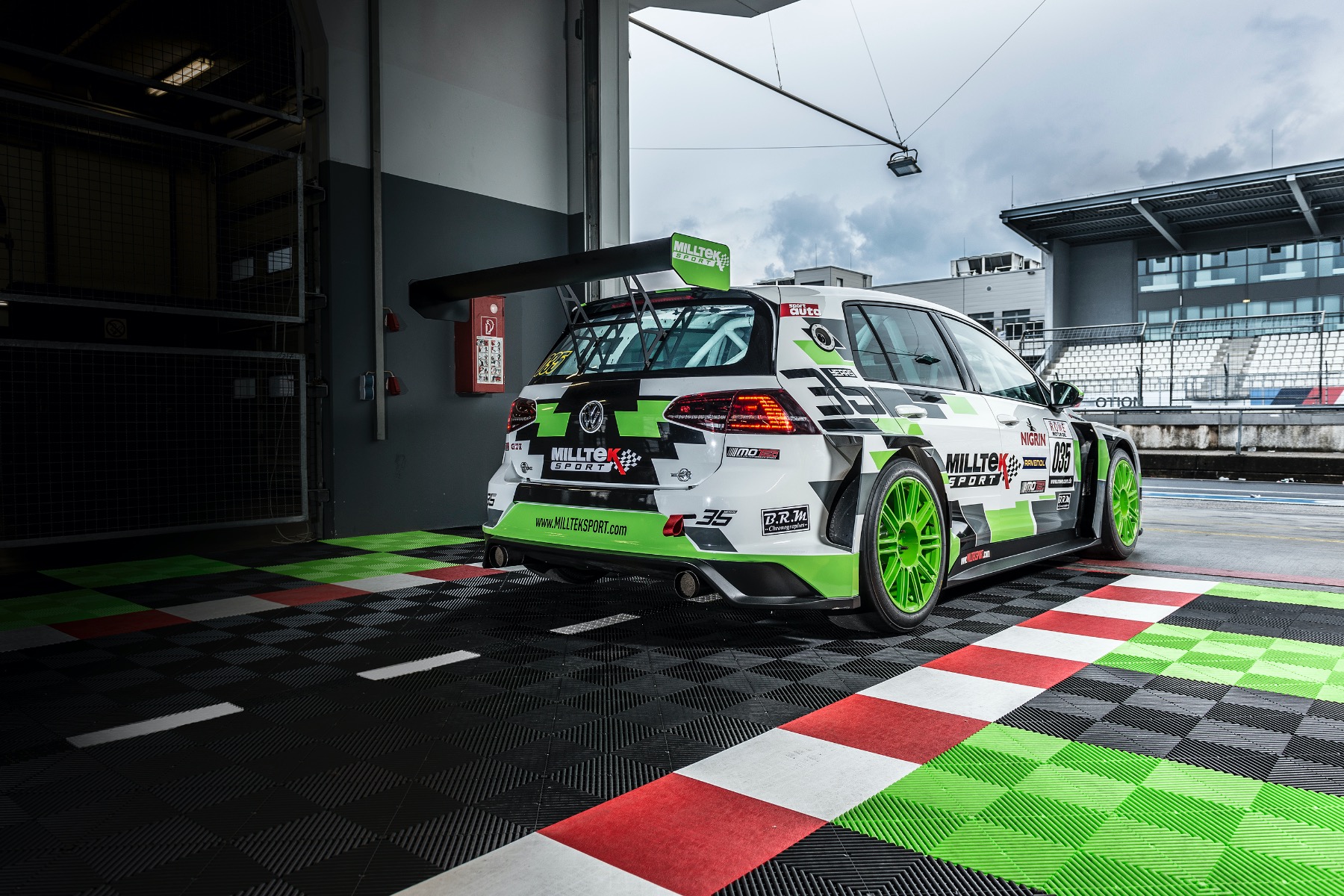 Of course, Golf’s aren’t only about racing and you didn’t need to strip one down to the bones to have fun! This final throwback proves that. Our Mk 1 GTi was a favourite in the office even when parked next to 600 bhp monsters in the Milltek Sport garage. The Mk 1 GTi was able to hold its own with its infamy, iconic silhouette and infinite ability to put a smile on the driver's face. Weighing just 840kg and a modest 112 hp this was the original blueprint for power to the people, showing that you didn’t need to break the bank to have a good time on the road. Enjoying a decade unchallenged on the hot hatch throne the Mk 1 GTi will forever be the benchmark of each of its successors. Our Mk 1 also has the company of the MK2 in the Milltek sport garage. The Mk2 had the enviable job of following-up the instant classic that was the Mk 1. All things considered it succeeded, some may argue they prefer the more visceral driving experience provided by the Mk 1 but the more refined Mk 2 brings a feel of improving the quality of your experience. The creature comforts that we wouldn’t even consider today are all present, by improving the pitfalls of the MK 1 they made the GTi easier to live with. Put simply, It’s more comfortable, spacious and gives you the best of both worlds, you don’t always have to be switched on with the Mk 2,  but when you want to it’s able to keep up.   With both of these classics having multiple Milltek Classic systems still available, it’s still possible to breathe new life into these icons of the 80’s. 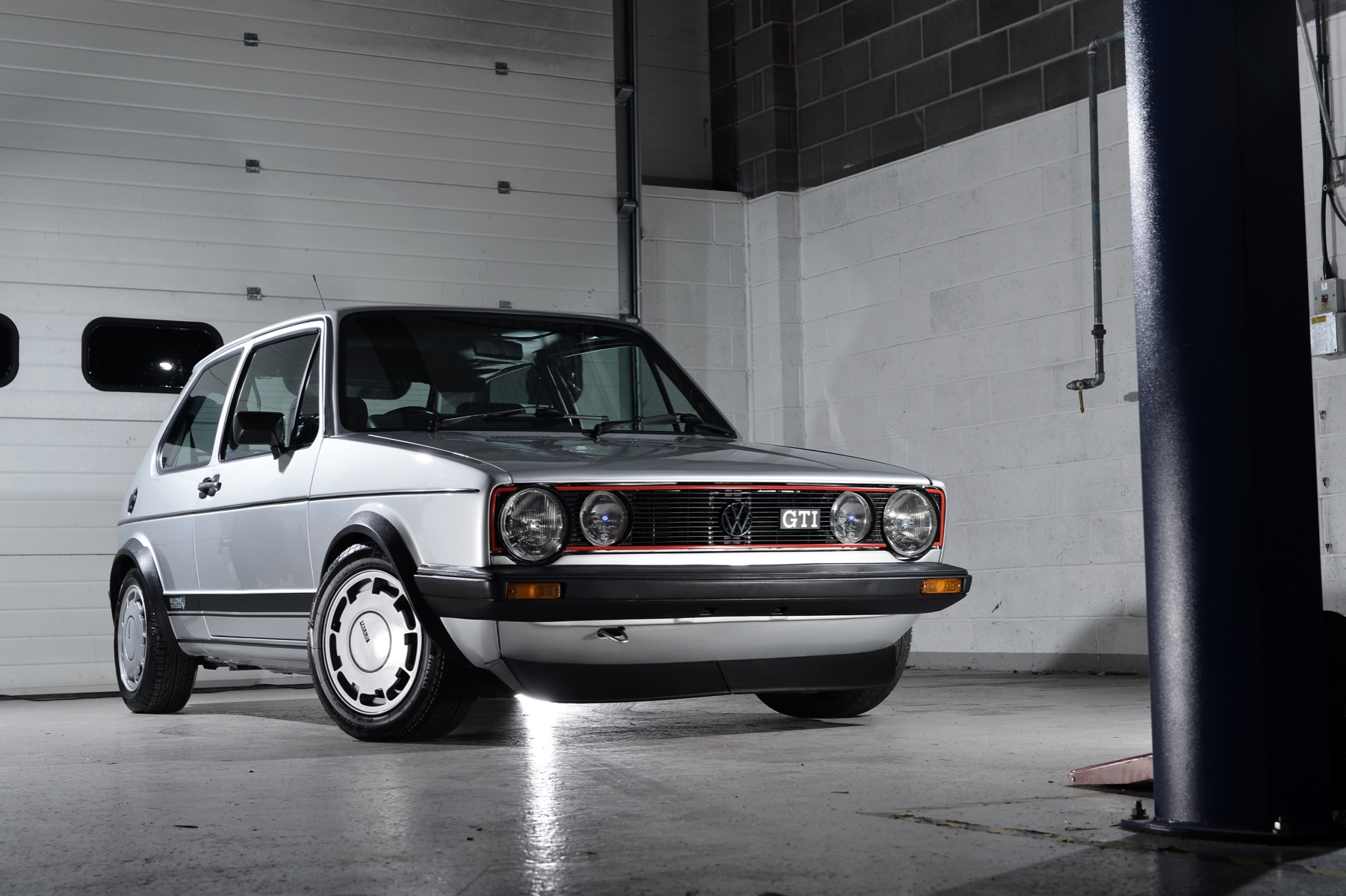 We’ve produced systems for every generation of the Golf GTi so far, one of the few models on the market that can be said for. Each model represents a new challenge to produce exhaust systems worthy of this iconic model and the legion of Golf fans. We’re looking forward to making our products available to Mk 8 owners as soon as possible, be sure to follow all of our social platforms to be first to know when the Mk 8 is in for development and when products come available. 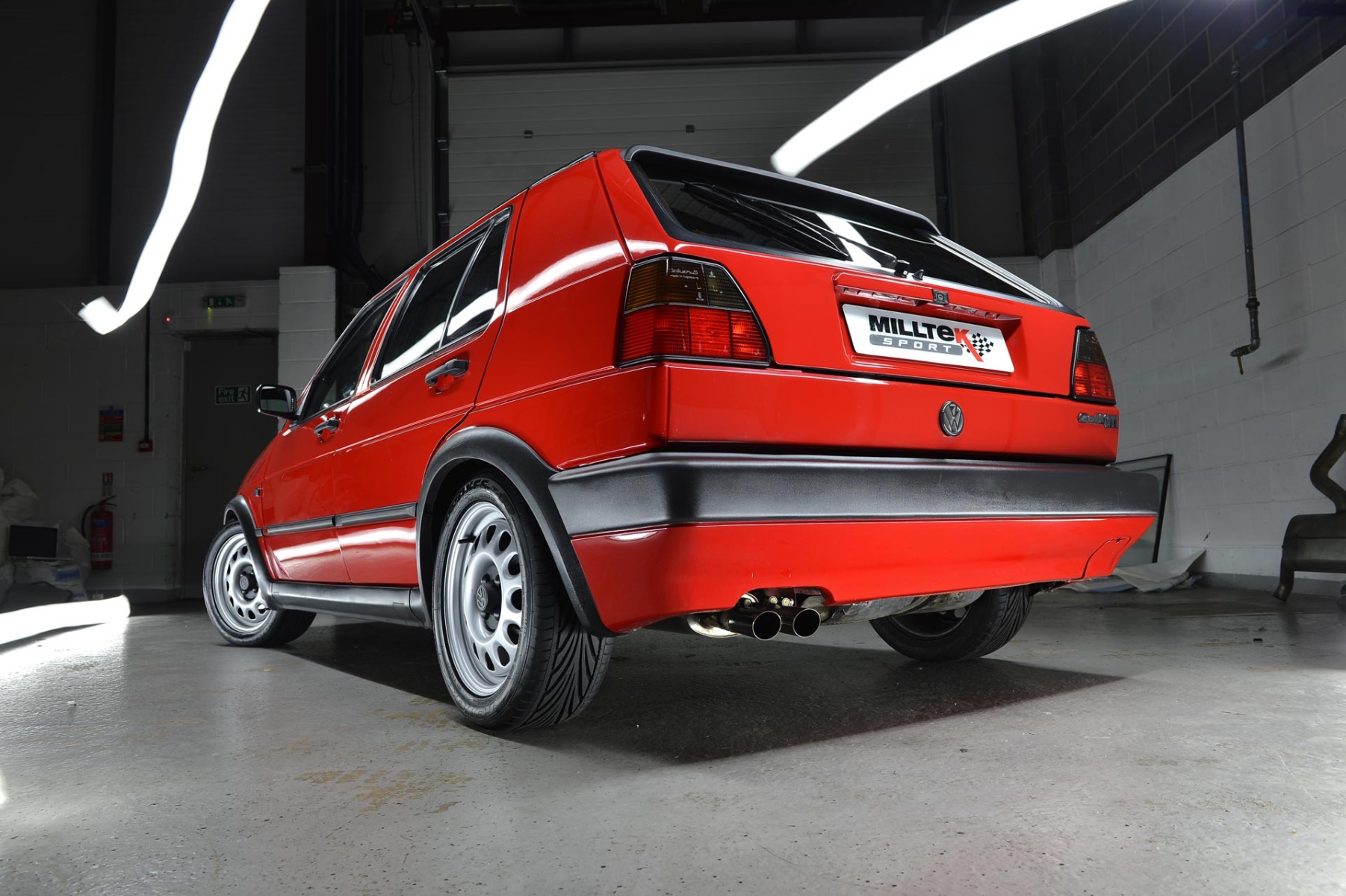